One minute I was standing surprised in front of a shop that seemed to be only selling beach umbrellas, the next I spotted a woman behind one on a far away balcony.

I stopped off here partly to break my journey to the north, but mainly to meet Shiatsu practitioners and teachers.

Evening drinks with Marie-Helene and a yummy lunch with Daphne were both really satisfying exchanges. The joy of meeting others in my own, rather niche profession and being able to talk shop, knowing they speak the same language (Shiatsu I mean! I spoke French with one and English with the other) was delightful.

I thought it was a church, but it turned out to be a night club! Thessaloniki, Greece

There was WiFi at the Studio Arabas hostel where I stayed for 2 nights, on Satchouri. I booked through Hostelworld. It is steeply uphill and I didn’t have time to explore the Old Town that it is in because I was meeting people in the part nearer the sea where most of the monuments are – that’s a good trek down and climb back up so be warned.

I left early to walk the hour to the bus station and caught the morning sunlight, Thessaloniki

The hostel was clean, but not in a squeaky clean sort of way. I got some advice from the lovely Charlotte while I was there. Although you can’t do this at her place…

… It is always worth booking a hostel by phone or in person because you often get money off or a free breakfast. They save money on the fees they have to pay to the third party, the booking website.

The book fair was on that day, Thessaloniki, Greece

I was on my way to a meeting but needed a cup of tea. It was going to be an hour’s walk. Until, that is, I spied Vermilion.

Just my sort of place. Creative and friendly, good WiFi and recycled jewellery.

I was early and they were cleaning and preparing for the day, Vermilion, Thessaloníki, Greece

Nearby are other nice places – a bakery, cheese shop and more. 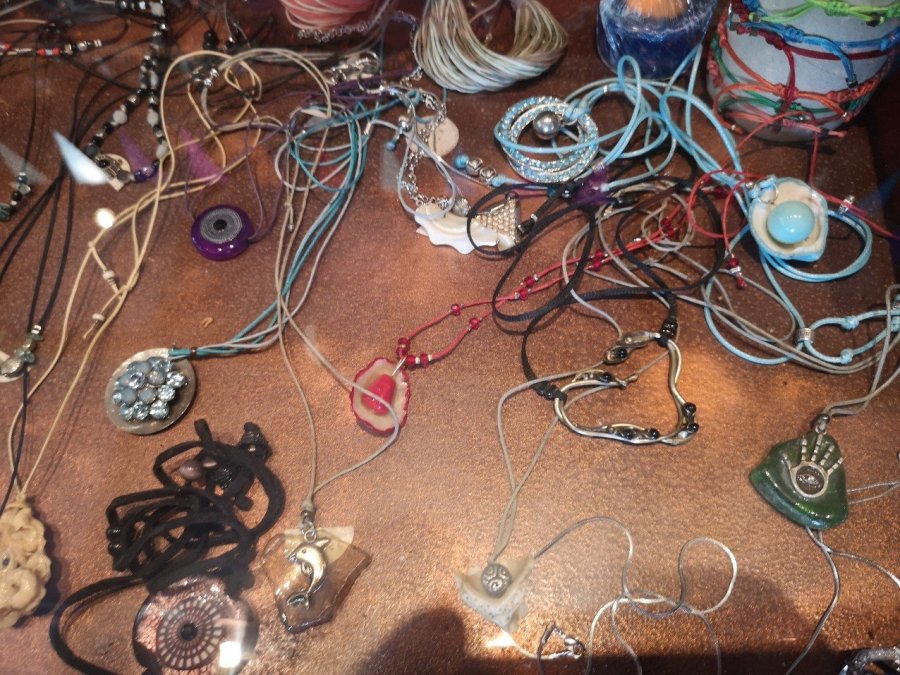 Recycled jewellery made by the owner

Local people resting in the shade

I was fascinated to glimpse women sewing and men and women sharing a drink in the shade. 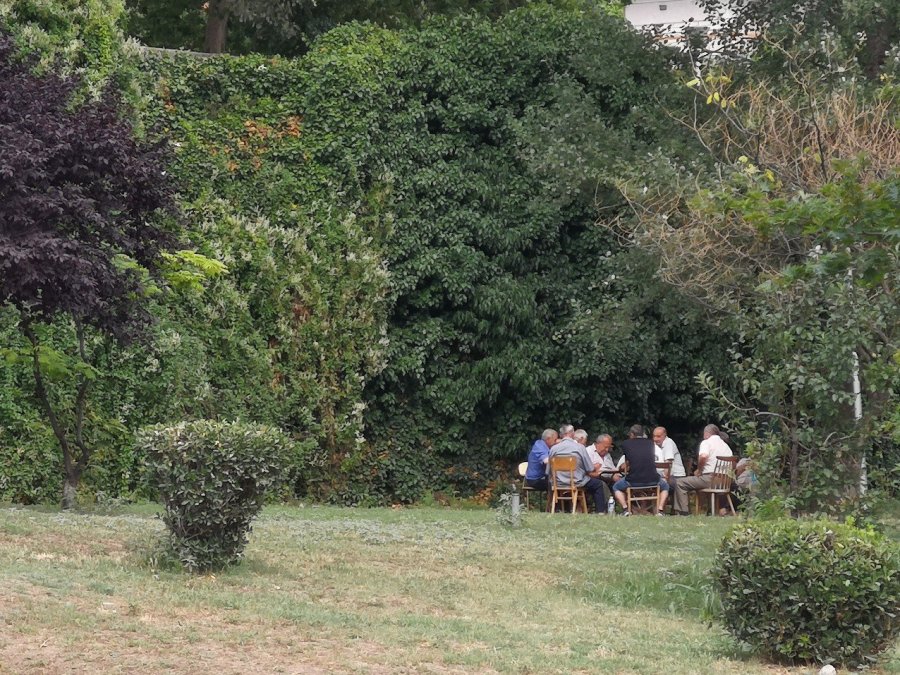 A group of men in the distance, taken with the zoom. They went back and forth through a door in the wall behind – I was so curious!

In Greece many people draw a cross on themselves when they see a church. A woman on the train did it as we whizzed past one. Later I saw a man walking a dog, doing the same thing .

There are Classical Greek columns everywhere in Thessaloniki. 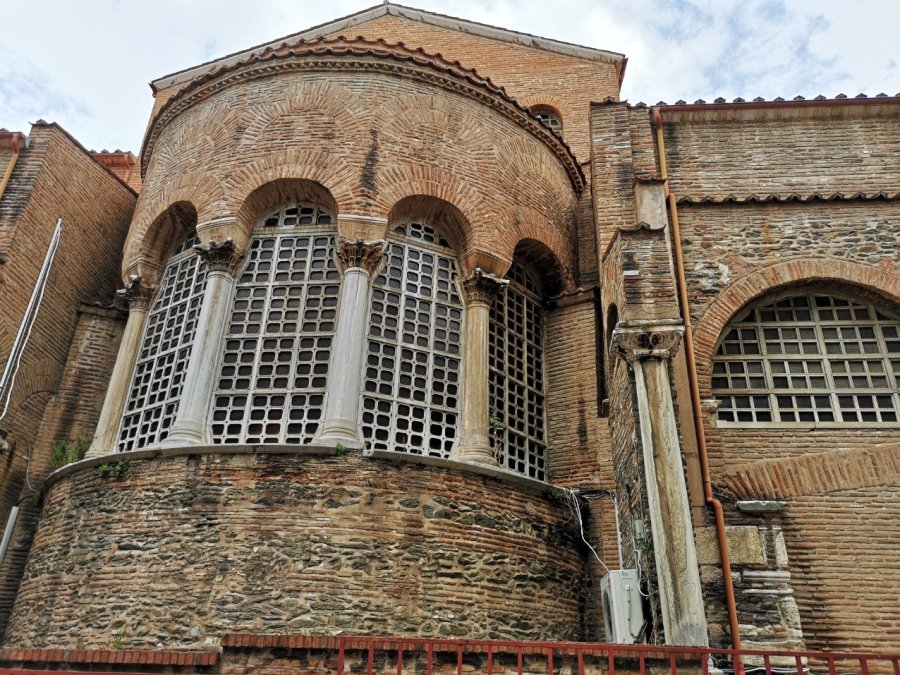 This ancient monument was built in 305 AD following the final victory of Emperor Galerius against the Persians. 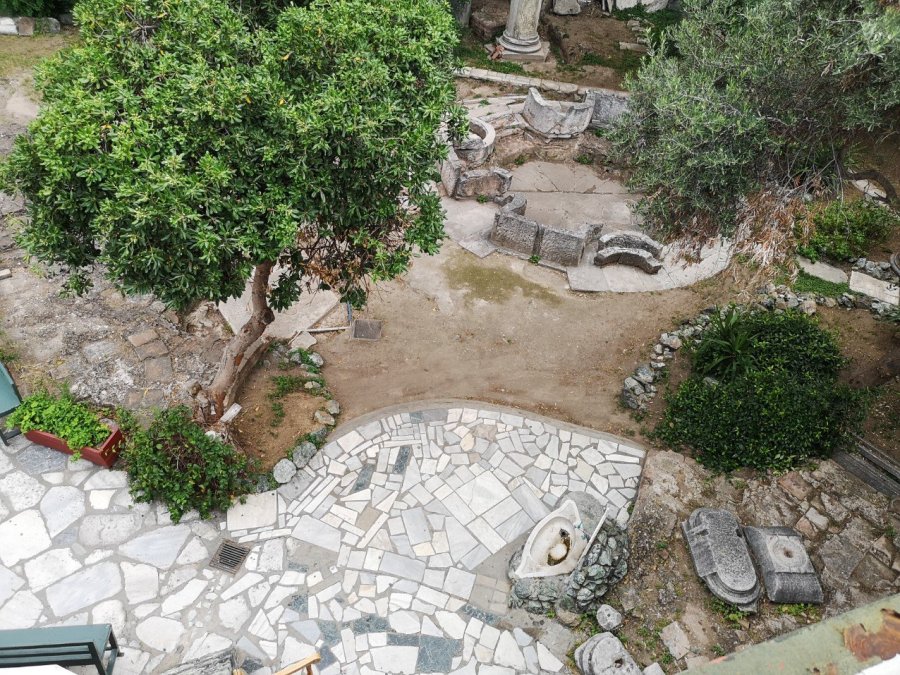 Carvings from the arch

Everywhere there was marble – walls, floors, and columns of course!