Walking without a dog: Forth Bridges, Aberdour, Edinburgh

The journey from Edinburgh to Aberdour takes 31 minutes and it cost me £5.35 return (I have a Scotrail Over 50s card). What a bargain!

There was the new Forth Road bridge in all its glory! A yellow crane stood beside each of the uprights, and it was teeming with vehicles, and people in high-vis jackets!

It’s a bonny sight, and takes the number of crossings to three: the red rail bridge, buxom and with a reputation for needing a new coat every year; the old road bridge, swanky but showing signs of age; and now the elegant, silver-white virgin, as yet untouched. They all, more or less, connect South Queensferry to North Queensferry, and the views are impressive.

There used to be a train which trundled along where Lower Granton Road is now, taking passengers and goods to Fife, Dundee and beyond. It rolled onto a large piece of wood with rails, floating in Granton Harbour, and was sailed across to Fife, before it drove off and up north without anyone having to get out. How clever is that?!

Aberdour is an historic village in Fife – pretty, well-off, and you can see my flat from its sands. After work, I walked down to the beach and wandered east amongst the seaweed and rock pools (approx. 5 mins) smiling at dog walkers as I went; and then west to where the boats are moored, across the wonderfully named ‘Dour Burn’ (‘dour’ means ‘relentlessly severe, stern, or gloomy in manner or appearance’, and a ‘burn’ is a small river or stream) on the wee brown bridge. From there I joined the Fife Coastal Path onto the headland and around to the next bay. I am definitely coming back to walk that Path when I have time.

There’s a municipal tourist board to help you identify the islands and hills you can see across the water, including Arthur’s Seat, Salisbury Crags, the islands of Inchcolm (the one with the Abbey), Cramond (the one you can get stranded on if the sea covers the crossing before you get back), and Inchmickery. Apparently it is the latter which was said to resemble a battleship to scare off invaders during the war, although I thought it was Inchkieth (the one I can see from my yoga class and front room). 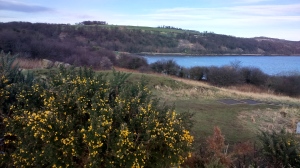 This is the first walk I have had outside Edinburgh city since I returned from Yalding (Kent) where I spent New Year. First I got the scent of the sea, the sea plants, and the sand in my sinuses, and they cleared (fantastic after my cold); then, as I walked slightly inland, the whiff of the newly disturbed earth and the wet bracken. My respiratory system sighed with joyful relief! 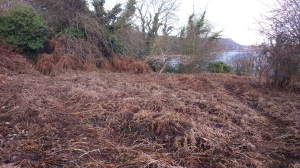 Everyone was very friendly. There were helpful directions, and a Scottish version of ‘Buen Camino’. ‘Enjoy your walk, she said, smiling. I have a fear of going the wrong way. I think it is because I never have enough time and so do not want to waste what I do have. As it was I ended up at the ‘Silver Sands’ car park twice. 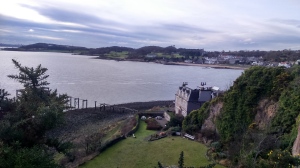 I spotted a bird of prey I could not identify. I kept seeing an unusually long body part as it turned around on the air current (neck? legs?) and hovvered in the sky above. I asked a man with binoculars and he kindly told me the difference between a sparrow hawk (red tummy), buzzard (‘very large’), and kestrel (pointed wings). I am still not sure what I saw, but it was the size of a large gull. He drew out his camera and sifted through several 100 photos before showing me a gorgeous picture of a robin silhouetted against a dramatic sky whilst perching on his hand (which, he explained, was poking outside the car window) .

I enjoyed a green tea and scone at the McTaggarts Cafe (was that where I lost my keys?). Good service, delicious cakes, WiFi – recommended.

Here’s another shot or two of the station. Only I can wax lyrical about a station, but it is so pretty. And it’s got a blue and white pot on a barrel (almost like a museum-exhibit, it could have come from friend Lesley’s kitchen), a most interesting clock, and a greenhouse. I have never seen a station with a greenhouse before. The man in red (can you spot him?) was potting up the containers while I waited for the 3.15. 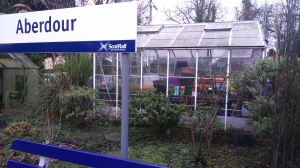 There is more to Aberdour than I that. There is a castle, at least one church, an obelisk, and a shinty club, so I recommend you stay there for a couple of nights. 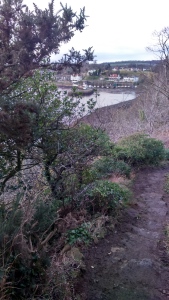 I gave a very enjoyable Shiatsu to a client after my return (or did the keys drop out of my pocket on the train?), and then I had my second walk of the day.

It was raining heavily all through the 50 minutes it takes to get home, indeed my shoes and coat are steaming on the radiator as I write. My toes got wet as I traipsed the first few streets, and the pools of water in my trainers had spread to my insteps by Stockbridge. Eventually my heels were soaking too – that was when I was passing the Botanics – but inexplicably they were still warm. And what a lovely walk it was. I had loads of creative ideas (eg I decided what my book is going to be about, and I came up with an alternative topic for the Eastwood House residential), and even if I do not get my keys back I will manage somehow.

There are no photos of this walk as it was dark, but I will take the opportunity to moan about the lack of street lighting, especially on Doune Terrace and Gloucester Street. And I will leave you with the last, lovely photo of the beautiful, blue, Firth of Forth. Sweet dreams!

Aberdour, Visit Scotland (I like my photos better!) https://www.visitscotland.com/info/towns-villages/aberdour-p239011

2 thoughts on “Walking without a dog: Forth Bridges, Aberdour, Edinburgh”