From Albufeira to Portimao, November 2019

The south coast of Portugal is absolutely stunning and I highly recommend it. There are some very built up areas and busy beaches because it is so popular with tourists (especially British and German), but the sections inbetween are amazing and very unpopulated. 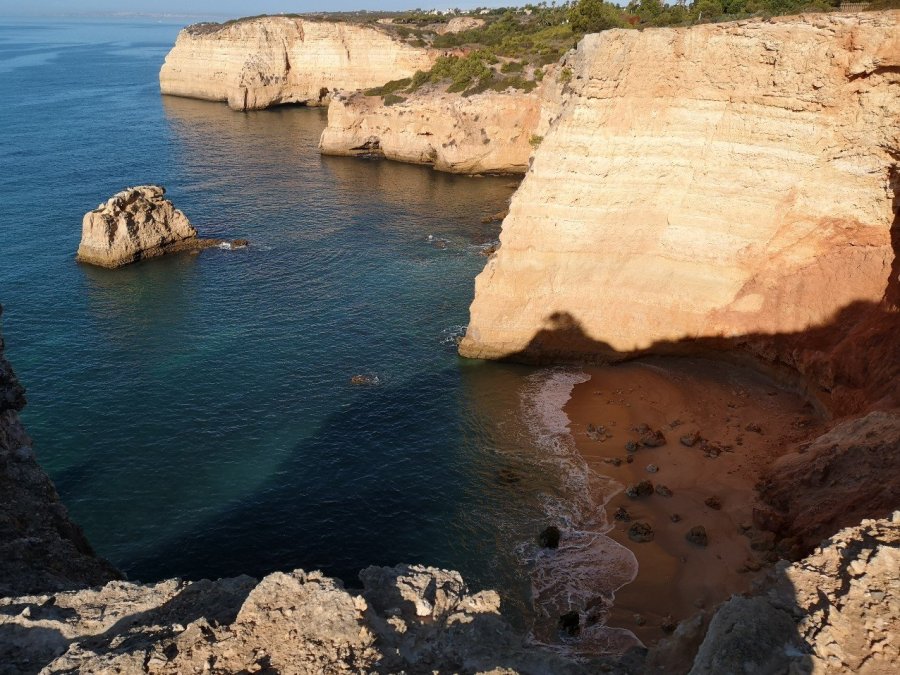 I arrived in Albufeira by bus (Terminal Rodovario de Albufeira, just off Estr. de Vale de Pedras) from the airport. This was actually no mean feat, as the Rede Expressos poster information at the bus stop is erroneous. Rede Expressos is the national bus company and is usually an extremely good service (on time, efficient online booking system) which I used many other times with no trouble. I recommend that you use their website rather than written information, as it is up to date. However, do not allow your phone to translate it into English as it translates the place names which are also real words such as Sal from Alcacer do Sal meaning salt and Pias (a small town in the south east) meaning sinks! This makes it very hard for non Portuguese speakers to find where they are going.

This is the correct information, as of November 2019

When I arrived, I walked into the town which took 30 minutes. The road takes you past Lidl and other stores. I went in briefly, but it was so similar to home, that I resolved to shop locally and left immediately.

The Orange Terrace Hostel (Rue Padre semedo do Azevedo 24, 8200-167 through booking.com) provided everything I needed, including breakfast. There were some great people there and a delightful terrace! Cost 16 euros.

I hung out in a little municipal park with a sort of modern pond and benches overlooking the main strand, and shopped at a little shop at the top of the hostel street for bread and other provisions – very cheap.

A man was jumping from an enormous height into a big net when I went past the marina – the sort of things some people do for fun.

I did not follow a trail, but instead either ‘followed my nose’ or changed my google maps into the satellite setting where you can see all the tiny paths on the cliffs . 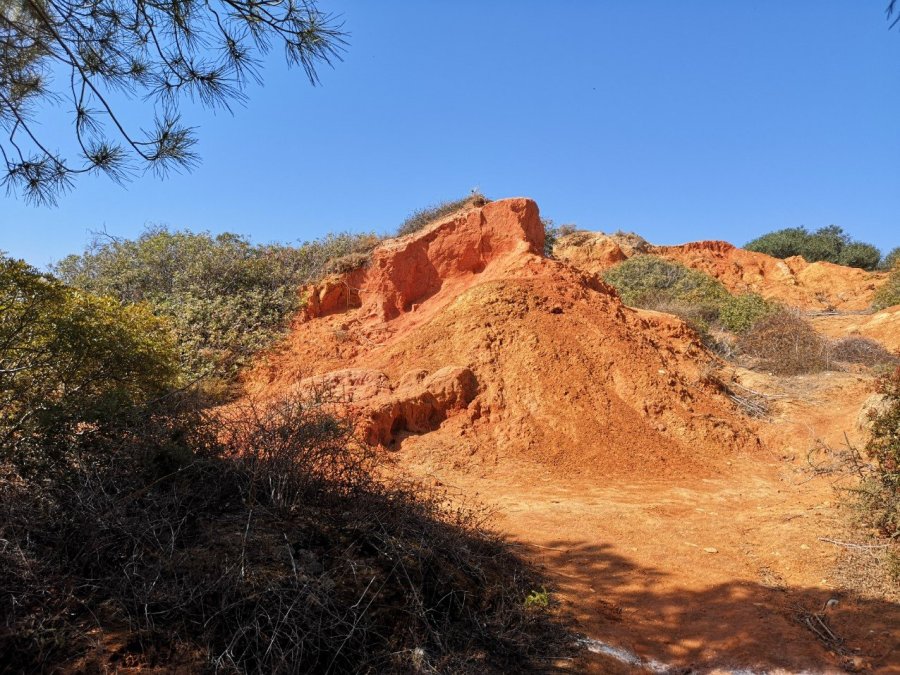 At one point I got rather lost in a maze of villas, trying to take a short cut as it was very hot and I knew there was a beach coming up where I could take my boots off and have a swim.

Then it poured with rained and I spent a good hour with a green tea in the restaurant. Most people seem to eat big meals at these places so they are not really suitable for a cake and a cuppa, although in this case it was after lunch and they were very friendly (as they all always were).

I stayed at the Lost and Found hostel that night (more of a motel on a busy road, but it had a pretty courtyard where I could do my morning Tai Chi, an amazing kitchen and it was scrupulously clean. There were two supermarkets nearby, with ATMs for getting money out.

I used booking.com again for this. Cost: 15 euros for a bunk in a dorm of four with a spacious shower room and toilet en suite. I shared with a Spanish man of few words, and had a good chat over supper in the kitchen with another who told me about the family restaurant near Granada where he works.

The next day I made my way through Sesmarias to Praia de Gale and thence Praia dos Salgados. There are many sections of boardwalks (like the Camino Portugal de la Costa in the north) and they often traverse through protected natural areas where there are birds (egrets, for example), plants and animals of interest.

It is basically one beach along the length of this part of Portugal.

Wide open sandy paths run amongst still-green undergrowth. Inlets and lagoons, sand banks with fishermen and high-rise, white-washed apartments in the distance: Armacao de Pera, where there is a fortress, and knowledgeable staff at the tourist information. Here I stopped to buy a pastel de nata (Portuguese custard tart) for my elevenses.

My way wound through spiky bushes and always the sea was on my left. Brown and cream butterflies were warming their wings on hot stones which had been whitened by the sun; parched roots; yellow/green, soft pine needles; and palm trees in the rich man’s garden (Carvalho, the footballer, has a property above a beach named after him) where swans swam and lemons hung on branches of shiny leaves.

There are high class resorts with grounds kept fresh from constant watering, and just the most spectacular beaches.

I took a wrong turn and went down. This meant that, of course, I therefore had to go back up – about 150 steps, which was hard work with the rucksack in the sun.

Here I waited for a bus to take me to my lodgings as it had taken me longer than expected and I was reliably informed (by the surfing dude in the wooden cabin on the beach) that I would not make it by dark. He was right.

I sat by the wayside waiting for the local bus which a woman tending a clothes stall had pointed me towards. This took me to perhaps the most disappointing hostel of my whole trip. It promised a garden, but it was separated into various areas which all seemd private or had a vehicle of one sort or another in them. The kitchen and dorm was open-plan. The hospitalero was not around once I had booked in, and there was one other person who seemed to be a long-term lodger, a chef in a local cafe. It being cold at night at this time of year even in the Algarve, I prepared my tea on a temporary stove in the one mug that I could find, and huddled until the morning.

Once again I had been staying a little way inland and so had a short walk to the start of the Caminho das Promontorios (Trail of the Headlands). The route was harder to find and I lost my way several times, once bringing me to tears of frustration as I wandered around in circles. In the end I simply waited until someone else came along – a kind man who continued to look back to check that I was still following for the quite a long way. It was really lovely scenery and there were lots of hikers going one way without rucksacks and getting a taxi back. 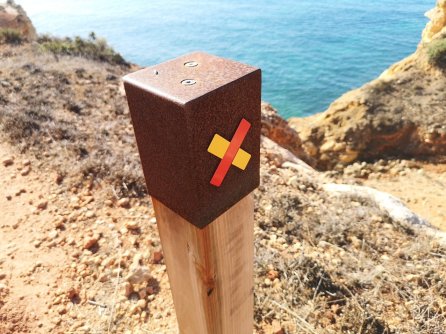 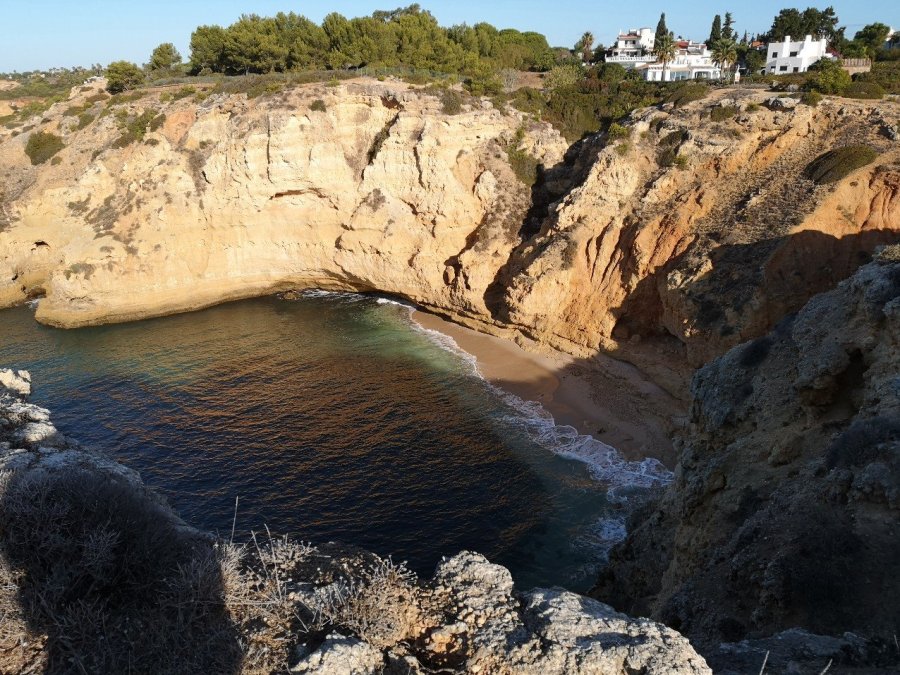 I phoned up that night when I realised that I had not remembered to gather together my things. I asked if anyone lived in Portimao and I was lucky. A few calls and days later, I arranged to meet someone and eventually I got the costume back (never the towel – the travel one which D had kindly bought for me from Germany. I managed without a towel for the remainder of my trip (three and a half weeks). I am very grateful indeed for their kindness.

Link to the Lighthouses of Southern Portugal page.

Smoke (by day) and fire (at night) signals were set by sentries to warn the populace.

From the Farol da Ponta do Altar (lighthouse) I made my way around the promontory towards Portimao and there was still a long way to go, so I took a water taxi, waiting on the beach with a cool and most welcome drink.

When I read the small print for the Plaza Real by Atlantichotels which I had booked (again through booking.com), it said I had to leave a deposit of 200 euros which I have never had to do before. Despite my best efforts to contact both booking and the hotel, I could not get it waived and was rather nervous in the run up. However I needn’t have worried. The kind receptionist explained that they do not take it off your card or need cash, just take details in case you make a mess in the room. It was a bit like hiring a car without paying for third party insurance – slightly nerve-wracking, but then again, I wasn’t planing to have a party.

It cost 24.67 euros and I had a whole apartment to myself, that was 4 rooms! (There was also the use of a pool, but I arrived too late to use it and it was in shadow and therefore cold). The supermarket was a good walk away (back towards the city, although the were two smaller ones nearby).