23rd May 2017. Via de la Plata camino walk, Spain. Day 8: Villafranca de los Barros to Torremejía, in the autonomous community of Extremadura, Badajoz province. 26 kms which should take a minimum of 6 hours with breaks.

I left Villfranca at 5.50am and it was darker than ever before. Once I had found my way out of town I was in open scrub land. There was the dawn at the edge of the world; the sky was blue, red and orange. I heard the sound of a lone cockerel, a white horse was just visible, and I smelled the faint odour of farm fertiliser.

There were orange lights already in the distance, and tractors passed me under the tiny, thin crescent moon. The dawn chorus was sounding: Oh, the sweet, sweet feathered melodies! 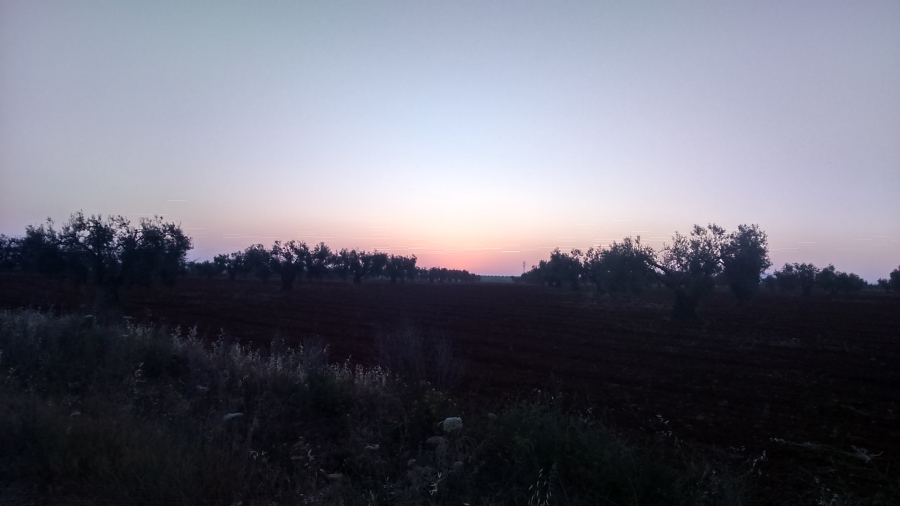 As I found my stride, my state of mind calmed. My pack was extra heavy with provisions, and my feet already hot, but the air was cool and I gave thanks for that. The dusty path was occasionally lit up by one or two red tail lights of farm vehicles. Then it went quiet. The flower buds were tightly shut.

The moment when the the sun finally rose was very exciting, and afterwards the opposite sky was a blank in comparison.

‘(Pilgrimage is) … walking in search of something intangible..’ p. 45 Wanderlust by Rebecca Solnit.

Some travellers write their blogs after getting back home, after the whole trip has ended, and I can see why; although the trekking itself does not take all day every day, so that you would think there was time enough in the evenings to write, I find that the attention needed to deal with practicalities, together with the attendant tasks of looking after the BodyMind, can take up a surprising amount of time and energy. On this journey I started  posting my blogs daily, but gave up part way through.

I recently advised a prospective peregrino to leave books at home. That was partly due to the weight, but also because I do not read much when I am on a pilgrimage, and I do not see others reading around me. Fiction can transport you to another place, and many pilgrims believe that focussing on their spiritual goal is vital and do not want to be distracted.

‘…- and for pilgrims, walking is work.’ p. 45 Wanderlust by Rebecca Solnit.

As I walked, I was reflecting: I could see that I have a tendency to set myself extra and unnecessary tasks. Yesterday I did some work for the business back home (perhaps thinking I was indispensible) and it transpired that it was a needless task. As I put one foot in front of another I could take note of such patterns and habits of mine.

To the east were hills like different sized piles of manure you will clear up later, whereas the other half of the globe was flat to the horizon, and the vineyards of the Ribeiro region a uniform blue. The arrows were easy to see, the backpack was no bother, but my feet were still calling my attention at times.

Not long after, the sun lit them up and I enjoyed the immaculately ploughed red soil between rows of vines.

Olives, with their stumpy wiggly trunks, stretched into infinity. One patch had solar panels and an extra crop of what might have been green alfalfa between the trees. The cordoned vines had thin little stems, perhaps because the wires were supporting them so they did not need to be stronger. I would like to know why some rows were planted north-south, and some east-west.

The sweet fennel and cow parsley smelled delicious. My skin remained cool, and it was brightening quickly. Other wild flowers competed with the blue of the sky, and there were His Master’s Voice horns of pink, common bindweed by the path.

Before I left the hostel, breakfast looked better than usual so I had paid for it, and consequently I was full of sugary energy. On the ground, my shadow was really tall; I thought it must be my alter ego which could reach things down from high shelves in the supermarket!

In the fields, today’s job was trimming the long tendrils, and other than those men working (an occasional conversation reached me), it was me, myself, I as far as the eye could see.

I liked the swirls in the earth at the ends of rows where the tractor had turned; hated the repetitive machinery noise to my left which source I could not see; and blocked my nose from the acrid, chemical smell I had been warned about.

I had also read that there was neither village nor water for the entire 26 kilometers, and I could believe it. I only had one litre of water and so knew that I would have to be careful not to drink too much too soon. Sadly, as I took the signposted turning, the noise got louder.

The tireder I got, the less time had passed since I last looked at my watch! Chemicals smelling like paint were being sprayed, so I tried to pick up pace, but my body had set its own rhythm. Tonight, I thought, I am drinking some wine!

By 8.40am I was no longer alone; there were four Italians in a group and another solitary man on the road. We moved at regular intervals from each other.

After almost three hours without a break, I was casting ahead for a tree throwing shade, but there was not one until 9.20. After a fifteen minute break, and having eaten my orange because full much needed fluids and was the heaviest (delicious it was), I deduced that we were barmy, the lot of us, walking so far in this heat!

I then passed the hat-wearing man sitting on a wee waymarker, and he said he was muy cansado (very tired). He added that we were half way. On I went.

A town with unusual looking farm buildings appeared. Ah! maybe wine vats. It looked like the outside edges of a huge swimming pool and I imagined it was full of grapes with barefooted people trampling around inside it. Do they actually do that these days? I then realised that could of course be sewage, which would be considerably less ‘romantic’.

Luckily, the actual smell was of newly cut branches and very fresh sap.

For some reason I suffered a lot of pains on and off, and I also started to feel the skin on my right arm and leg, the side where the sun was, getting that soon-to-be-burned feeling. To remedy it, I draped my magenta wrap over that side of me – that scarf sure does come in handy. (See my blog on what to pack in your rucksack).

Swifts zapped flies, zig-zagging across my view. Were those cordoned olives? If they were, then that would make for many more plants per acre than the row system, so it would certainly make financial sense, if the earth could sustain it.

I broke again at 10.45 for lunch under a tree, feet throbbing – it was so very hot. A pylon was crackling like a fire, indeed there was a smell of burning. As I ate I let my crumbs drop for the ants and watched one carry a huge piece away, picturing it arriving back home, saying ‘look what I got!’ When I got up, I noted that it was a messy business for the bottom, sitting on the earth like that. I restarted at 11am and, yes, there were a lot of little inexplicable, smouldering fires alight between the olive trees.

Towards the end of the day’s walk I spent a short period, only the second time in the past eight days, talking to someone as we went along. He was from Barcelona and was doing the camino to get away from his demanding family, he said. He assured me that despite the exhaustion, of course he wanted to keep on walking until he reached Salamanca (a further eleven days). Such determination!

At 1pm in a 31 degree heat, and after seven rather than six hours of walking, I arrived in Torremejía. (Put the accent on the final ee: toh-ray-mah-heee-ah).

The hostel host owns a bar as well, on Avenida Extremadura, but there was a family issue and it was closed that evening, so I sat in the one opposite and had a beer and wrote my notes.

Useful info: the supermarket on the same street is shut for a long time between lunch and evening.

I did buy that bottle of wine I had promised myself, and I also invited the man in the above photo, plus a Dutch cyclist new on the scene, to join me. We had some surprisingly entertaining conversation, in divers languages, and it was very enjoyable to sit around the table with fellow travellers again, as I had done so often on the Camino Frances.

For some reason the host kindly offered us a free breakfast when his bar reopened the next morning; it provided simple fare with generous portions and friendly service.

Tomorrow would be my last day on this leg of the 1000 kilometer Via de la Plata, so I would have to wait to see Salamanca another time.

For a list of stages of this camino and other information, check out this link:

The Albergue Rojo-Plata is recommended. The host is very friendly.

Review of the Rojo-Plata bar. I had a free breakfast there but did not eat an evening meal

Found in the Cracks 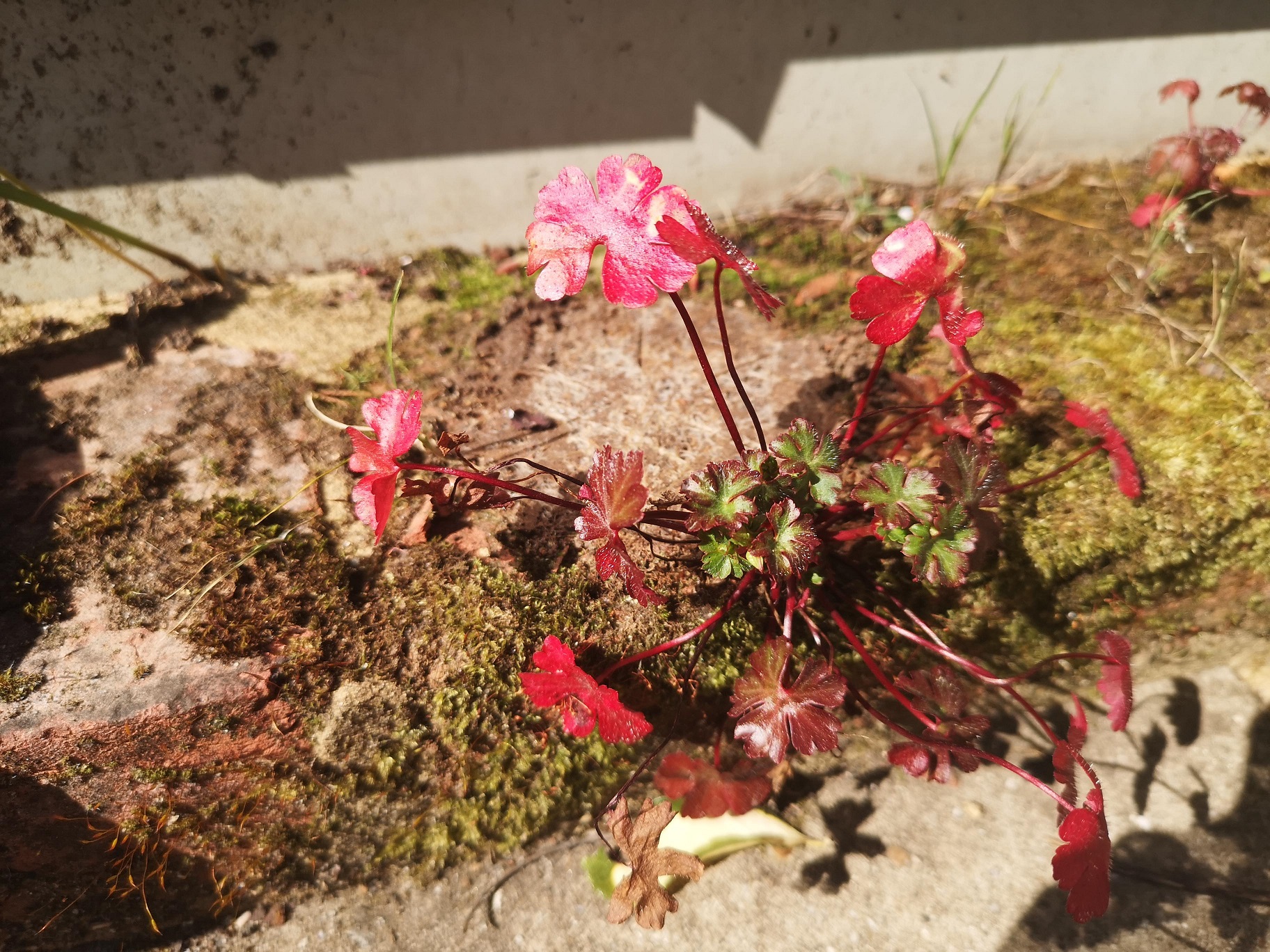 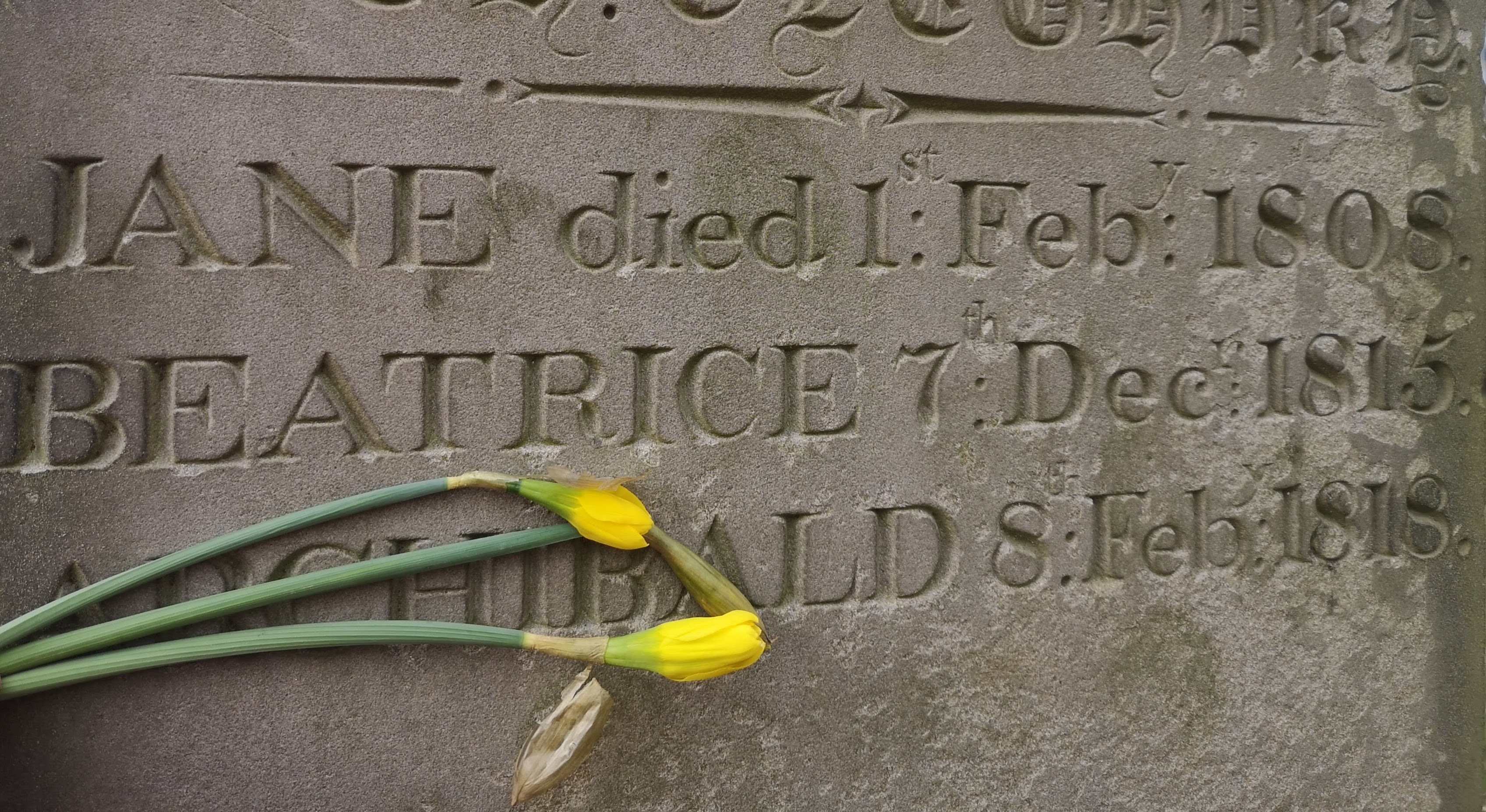