Most people in Edinburgh live pretty close to some green space* – a patch of grass for dog walking, a play-park for children (and teenage smokers), or the grander Holyrood Park with its famous Arthur’s Seat and Salisbury Crags.

Underneath, well, at a lower level than the roads, is where the network of railways used to run, and much of that is now an intricate, and, let’s face it, often very confusing, myriad of cycle paths. But, we are lucky to have them.

On a very chilly morning, when my phone said it was -2 degrees at 8.30am, I set off through Trinity for a meeting with wise Jenny. There’s a new Sculpture Workshop cafe, Milk, at the Newhaven end, offering welcome hot drinks and scones, and they have blankets for the very cold weather, which is a nice touch.

Three hours later, when the edges of the leaves still had white around them, I spontaneously chose not to return home on the pavements, but to take the path less travelled (do you know that poem by Robert Frost? see below for link), and I discovered that nature is at it again, preparing for spring.

Walking engenders trust, because every step I take is a reassurance that the earth is steady underneath me, and when I walk in nature I notice that it changes, and that those changes are cyclical, reliably so. If I keep on doing that walking I become reassured without even knowing it. Today is a reminder because all around me is shiny and green. I look carefully and the bluebells and snowdrops are poking their heads through! Whatever I do, good or bad, the seasons shift regularly, and the ground is still there when I put my weight down onto it.

Walking is quiet, so the wildlife doesn’t know I am coming, and I am startled by a bird flashing out of the undergrowth; a squirrel makes a courageous leap across the path and lands on the thinnest of branches above my head, sweeping and dipping backwards and forwards and up and down, as it tries to regain its footing and scamper towards the trunk. It manages to save itself from plunging onto the tarmac in front of me….just.

Traffic noise is there in the background and thank goodness that means I can hear noises closer to hand. I take an involuntary deep breath, and there is melodic birdsong and a repeated shussh rustly sound, as if something is falling through the bushes beside me. It’s a mystery what’s caused it.

I saw a wren, yes, an actual wren – so unusual that it must be a blessing. It was fluttering in the fetid-looking, standing-water in the sunshine. Except it can’t be stagnant because then I see a lady blackbird and a sparrow, and they are doing the same thing so they must know better and be on to a good thing.

A lot of the cycle path is in the shade in winter, but there are patches of sunlight, and that reveals badger setts. The black ice sometimes stays on the path all day long and my bike has skidded in the past, tipping me unceremoniously and painfully over. It can be dangerous in other ways: two of my daughter’s friends were mugged a few years ago on another section, and so I am repeatedly warned against walking on these ways at dusk though friends I know do it confidently.

Like the Camino, there’s a sense of a community along this network, with political or family-day-out posters on the lamp poles. There is evidence of little kindnesses along the way too: a rubbish bag that someone has put out to limit the mess, which is regularly emptied; a baby hat picked up and hung on a railing just in case someone comes back to look for it.

There are runners, buggies, and sometimes both – mums and dads running with the push-chair; there are bikes, some side-by-side with their encumbents chatting as they ride; there are single and nowadays multiple dogs (there’s a rise in people who go house-to-house collecting the canines for walkies while their owners are out at work); there are young and old enjoying the fresh air; commuters, and sightseers with sunglasses and binoculars. The other day I was overtaken by a ‘proper’ walker with a backpack, striding purposefully with poles; and there are folk on the way back from Morrisons with their shopping. 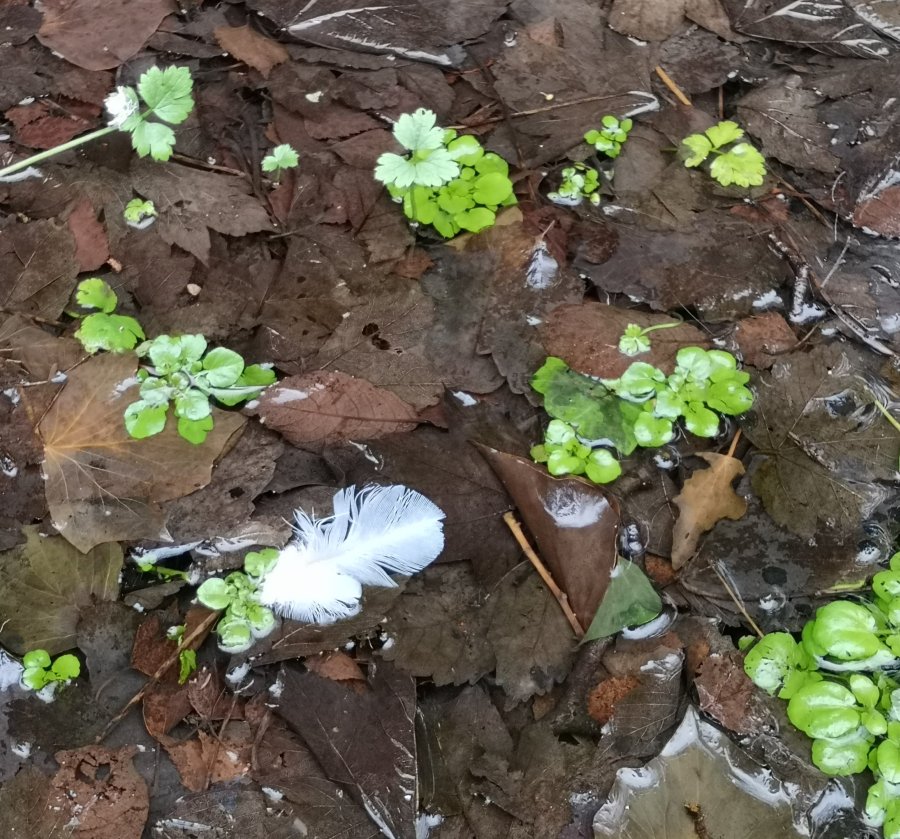 I walk on the tiny strip of grass by the side of the tarmac and feel/hear a familiar, hollow sound underfoot – not the clatter of my shoe on the hard surface, or the thud I get when I walk on the grass under the trees on Boswell Drive, but a sound as if there’s space underneath the icy ground. And it’s springy.

For an hour I walk, and I am unaware of the news or my day-to-day worries. In fact, when I walk I have noticed that the news becomes surprisingly unimportant. Walking and feeling the ground nice and solid underneath me seems to help me write about what is real, not imagined.

‘Soon’ writes Frédéric Gros, ‘you have lost all knowledge of the world and its gymnastics’. p.81/82 in A Philosophy of Walking.

*Study by Catharine Ward Thompson et al 2013: ‘Contact with green space in the environment has been associated with mental health benefits, but the mechanism underpinning this association is not clear. This study extends an earlier exploratory study showing that more green space in deprived urban neighbourhoods in Scotland is linked to lower levels of perceived stress and improved physiological stress as measured by diurnal patterns of cortisol secretion.’

Milk cafe at the Sculpture Workshop

How to find and negotiate the Edinburgh Cycle Paths Cycling Edinburgh

2 thoughts on “Walking without a dog: Edinburgh Cycle Paths”

Pilgrimage for COP26 – why am I walking? 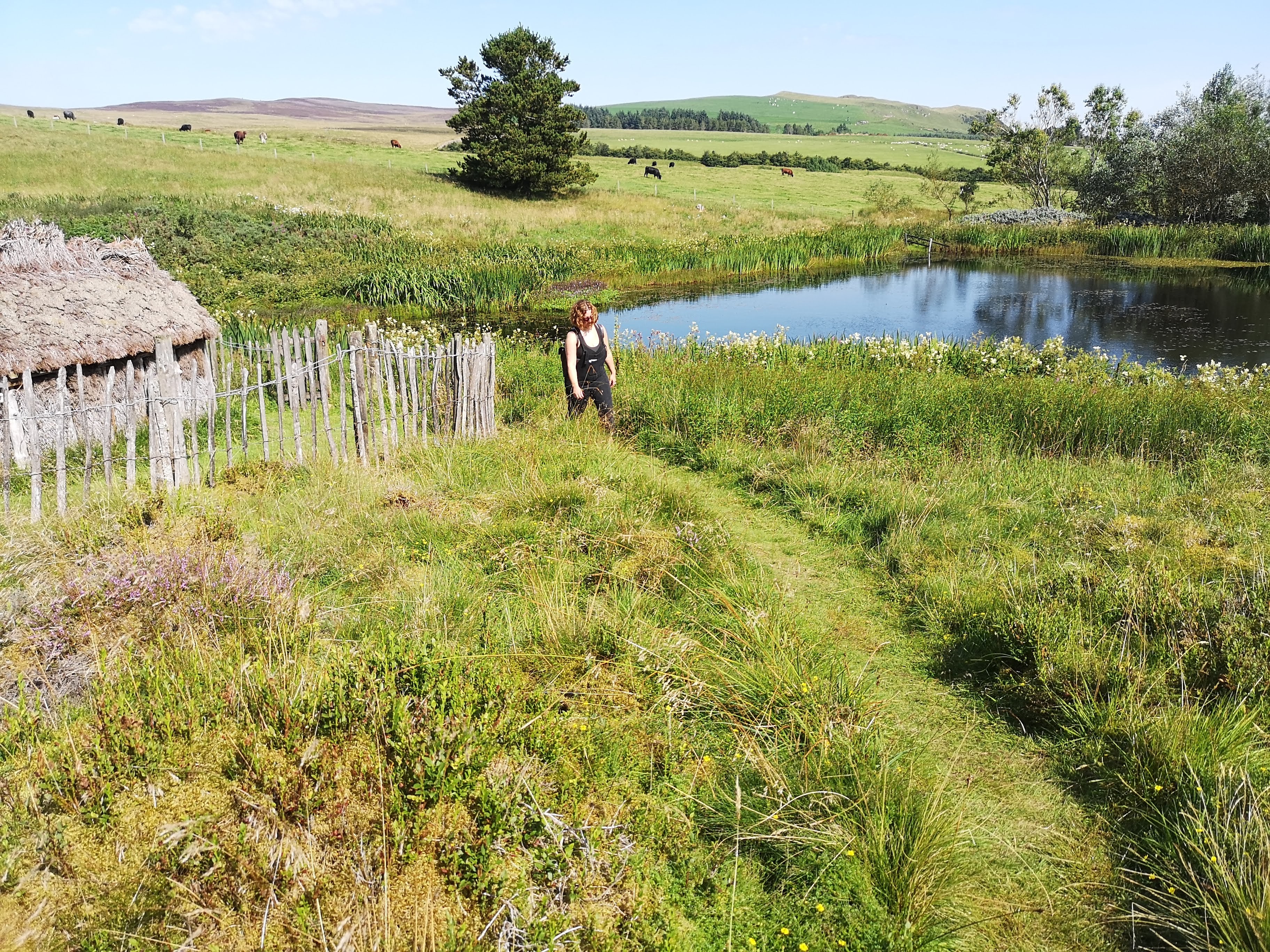