Aim: to focus on what I have, not what I do not.

Stops: One, to charge my phone and ‘recharge my batteries’ on the outskirts of Xinzon.

Getting lost: I thought I was, but then discovered that there is only one straight main road between Vilar de Barrio and Xinzon!

Other pilgrims: I was not on the Camino, so none.

Lesson learned: Just because there are huge signs indicating a train station and also a bus stop in the centre of a village, it doesn’t mean there are any means of public transport in or out.

A beautiful sunrise from the window of the albergue. It was cold outside until mid morning.

Having spent time planning my route into the mountains the previous night, I was surprised to find myself debating whether to continue. I was about to embark on the steepest climb into the mountains to Laxa, but I slept badly and had been sent various messages telling me of snow and rain further down the line. I realised that once I was at Laxa I would have to continue at least one more day as I would be in the middle of nowhere. I realised that I was really quite tired, and that the pain at the back of my knee, though not bad now, might get worse.

So, I took the tricky decision to stop walking and take a bus to a town where I could get a connection to Madrid. I had promised my hosts I would be with them on 27th November (10 days before), and cancelled at the last minute which seemed to be becoming a bit of a habit. It was not something I had ever done in the UK and was therefore very uncomfortable. Each time I was acting on strong, strong urges to continue walking.

However there were no buses (later I discovered it was a holiday), no trains (they don’t stop at the very well advertised and signposted station!), and the taxi was going to be between €25-30. I tried asking about a school bus or anyone going to somewhere who could give me a lift, but it transpired that I would have to walk.

There were more kindnesses from the man who charged my phone behind his counter, and another in the petrol cubicle who drew me a map, and they fortified me in my resolve. Off I set, back along the way I had come the day before and a particularly hard 3 hours’ walking. I even tried, weakly, to thumb a lift for the first time in my life (before the motorway junction to Madrid) but no-one stopped and I made it to Xinzon by lunchtime. 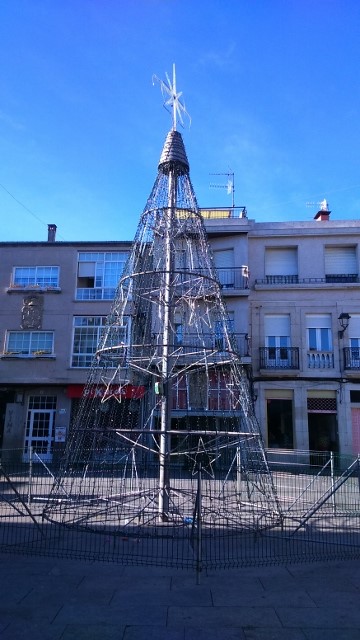 Where Xmas preparations were in full swing.

I only had half an hour between arriving at the bus station on foot, and leaving by public transport, but it was enough time to be sent on a wild goose chase to buy a ticket that I actually had to buy on the bus itself! I sat in the sun for the 10 minutes it was late, soothed by the warmth. I debated where I would stay the night.

I don’t know what or who this is a statue of but I liked it. Xinzon / Xinzo de Limia, Spain.

On arrival in Ourense, I booked the first bus I could afford to the capital and that took care of where to stay overnight. Then I shamefacedly contacted the folk in Las Matas and Barry kindly invited me for the following 2 nights. (I have noticed before that if I stop pushing myself when I am tired, and take an easy way, my plans start flowing again and decisions come easier).

The first time I visited Ourense I had promised myself that I would come back one day to go to the natural hot springs. Here I was, back sooner than I imagined and a happy 5 minutes from the out-of-town ones. So, with plenty of free time before the 24.15 bus, I went to laze in sulphur waters, and what an experience: one of the best of my trip.

For €4 there are 3 pools made from magnificent slabs of granite that glitter by the Miño Rive (river) and motorway. The delicate sliver of a half moon was initially suspended in a bright blue sky in which the sun was setting. Then the moon got brighter and stronger as the sky darkened to inky blue, until it was totally black. In contrast I was red from the heat!

One and a half hours of bliss and steam, lying back, intermittently leaving one pool for a freezing plunge, before entering a hotter one. I could feel my scratches, bites, muscles and joints being eased by the healing waters. The relaxation room has even got hot slabs to lie on.

This life is full of unexpected, new experiences.

I met a woman on her way down who showed me where to go. She had her empty plastic bottle and showed me her poor sore leg. There was a group of older people with their feet in what looked like a sewer (and smelled a bit like it) collecting the water. She said it works for her.

The lovely baths were followed by a walk along the previously really busy river path. I only passed one or two people. Tracing and retracing my steps in the pitch dark I searched for the complicated way back through unlit undergrowth, camper-van parking lots, disused industrial buildings and bulrushes.

What with clambering over railway lines, across dual-carriageways, under motorway passes, and jumping across rivers, I guess I’ve been taking a few risks lately. With my rucksack on my back, my phone torch in my hand, and my heart in my mouth, I was thankful I lived to tell the tale.

One thought on “Via de la Plata Camino – Day 9, Spain”