Carmen, a Shiatsu practitioner who lives in Oviedo, met me in Avilés and kindly offered me a bed and hospitality in return for Shiatsu. She also attended the workshop on the HT-Uterus meridian which I gave in Avilés.

Once I had settled in, I set off uphill from her flat for my first walk. At the first junction I saw a donkey and knew I must be in the right place. I had come to see the chapels of San Miguel de Lilo built by King Ramiro I in 842 AD, 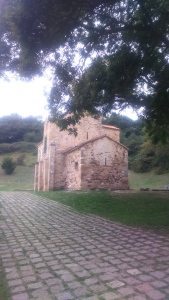 I spent a happy hour sketching in the sun. Drawing is a great way to understand the architecture of a building and allows time to appreciate its ambience.

The Cathedral of the Holy Saviour is also a world heritage sight, but Gothic in style. This I saw on my first tour of the city in the rain, together with the unexpected pipers. The sound was familiar (like Scottish bagpipes), and the costumes entertaining. 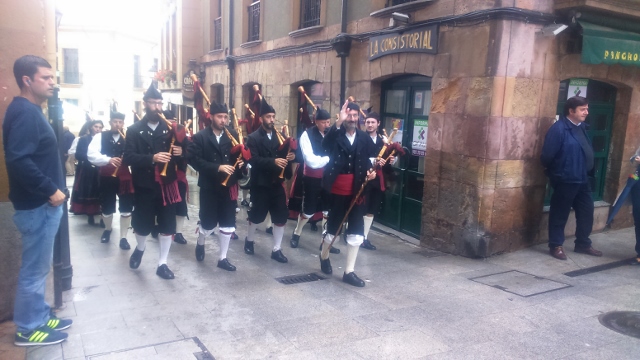 I love the colourful buildings I am starting to see all over the country. Scotland (where I live), with so much less sun, could definitely brighten itself up this way.

Spain is renowned for its tiles, here seen decorating a regular stair (Scottish word for the communal part of a block of apartments). 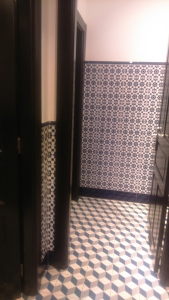 That night we took a drive to Monte Naranco, the highest point above the city and this impressive statue of Christ (that’s me at its foot!). 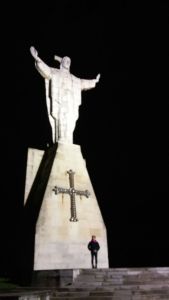 There is a great deal of urban sculpture to see for free, including Woody Allen who is something of a poular figure in the city after winning an award at the film festival; a little, homeless dog, Rufo which attended political rallies; and of course at least one donkey. 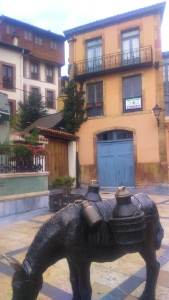 The Museo de Bellas Artes de Asturias is well worth a visit, with work by El Greco, Goya, Sorolla, Dali, and Picasso. Also look out for the clocks above the entrance desk on one side of the building with feathers as hands.

My host kindly took me to nearby Gijon where the sun shone. We walked barefoot on the beach and around the beautiful old town.

Thanks to Carmen for delicious food, great hospitality, and friendship.

Found in the Cracks