Today was all about the birds. 13th November 2019. And it prompted me to look through some of my other recent, avian memories of Portugal as I speed into Spain.

I was up on the roof today in Vila Nova de Milfontes (western Portugal) at 5.30am (that’s my favourite place to go on waking, wherever I am, if possible) doing my tai chi and yoga and standing around like a tree, as you do, when a wee gaggle of sparrows joined me. Lightly they hopped, pecking with their tiny pointed beaks between the ground mosaic for tid bits.

I sat down to meditate and a ringed dove came a-paddling. She dipped her head every now and then to drink from the previous night’s rainwater. Pale grey with a black choker, she was tinged with pink and very pretty. I didn’t spoil the time by reaching for the camera – just enjoyed it.

Today I listened to the dawn chorus drowning out the school kids. A week earlier it was the starlings who entertained me outside the hostel window, while I watched four, then six, then eight egrets foraging in a faraway field.

While I waited for the second bus later in Lisbon, I visited the Zoological Gardens (a stone’s throw from the Seite Rios bus and train station. The entrance is guarded by these pair of handsome eagles.

Sitting across the water from me, my green tea and pastel de nata was a heron, just like he was the first time I visited two months ago. Like a humfy old man in a great coat, he stood patiently.

Lodging my rucksack in the cafe-staff locker room, I took a walk under now Autumn trees and moving cages with happy boys in them, waving, to the seagull side of the lake. She too was bathing intermittently.

And then I heard this whistling! It was so loud and repetitive that I thought for a moment it was a machine or recording, but after some investigation I found the parrots.

I watched and listened for ages: some were completely scarlet right up under the roof and they skweeked; smaller green, yellow and pink ones squwarked while crowding next to each other on a branch, one helping himself to the green leaves hanging out of his brother’s beak (no hard feelings!); some cuddled up close and preened each other; while a fourth species were tilting their heads and whistling like there was no tomorrow.

I had been interested in her talons before (four per claw) which were large, but able to delicately hold the thinnest of twigs (the thickness of a blade of grass) while she bit off sections one at a time with her hooked beak and crunched it. 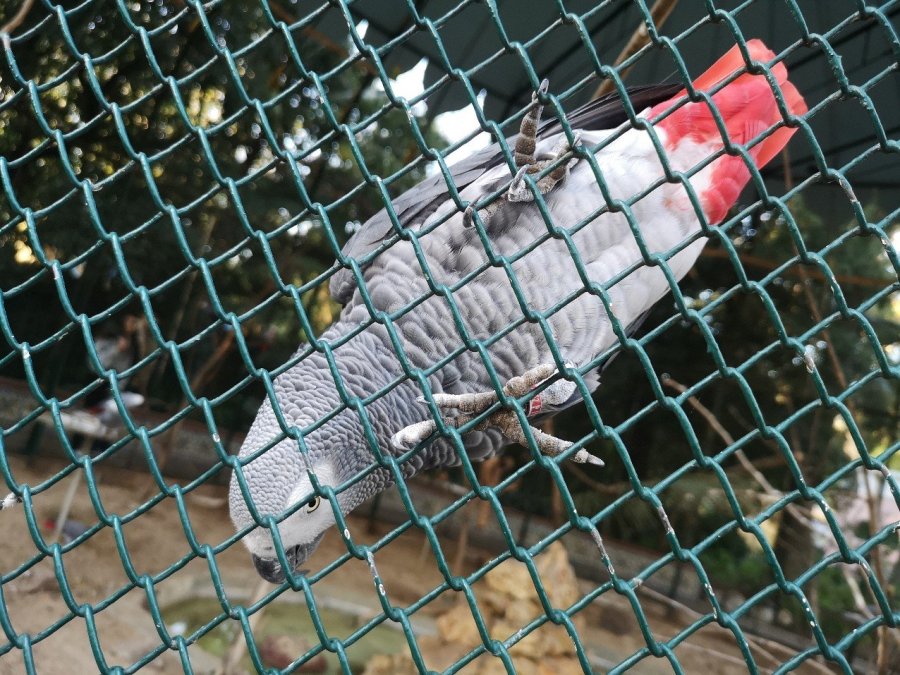 Now here she was using both feet and mouth to manœuvre into place and cling to the fence not more that 6 inches in front of me, so that these photos are real size. Positioning herself so that her eye was in a gap, she silently observed me. 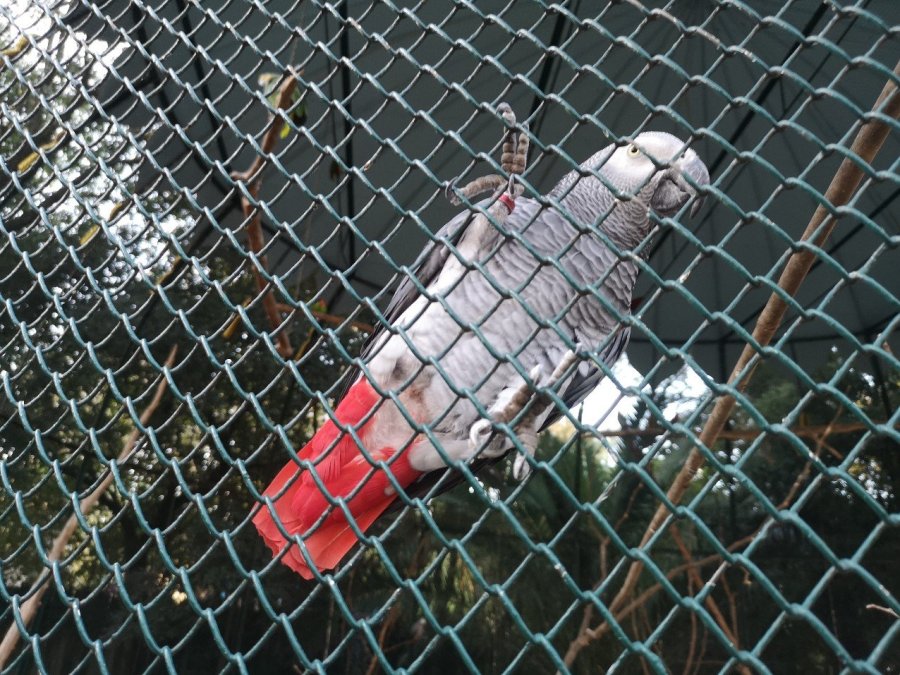 I was being shown her belly, the soft, downy grey with spectacular tail feathers underneath. While her sisters hooted over the other side, she kept me in her sights, but didn’t talk back. 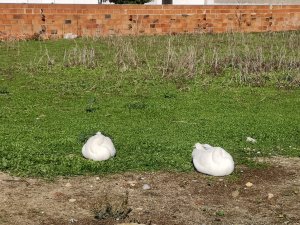 These ducks were white balls, sound asleep until a rowdy truck disturbed one.

I was mesmerised by a falcon amidst a flock of much smaller birds in Carrapateira. They seemed to be surrounding and then flying straight at him. Occasionally, he separated and made dive bombs, but minutes later he was caught up with the swarm again. Were they trying to warn him off?

Storks can be found all over the Algarve, particularly the Silves area where I had a perfect view of them gathering in the early mornings down by the river.

They perch on their massive nests which are balanced on top of poles, turrets and church spires.

Feathered fact: “White Storks are faithful to both their partner and nesting place each year and the building of the nest is carried out by the male and female together”
From Algarveblog

However, I was astonished to see one so close to the sea at Cabo Sardao.

My final memory is of swimming in a swirling sea, rocks all around me, when an oyster catcher plopped in just a little way away. I think I must be getting stiller for these birds don’t seem to be frightened and come surprisingly close. It’s a joy.

2 thoughts on “My Feathered Friends”